An organism’s life history is the pattern of growth, development, and reproduction over the course of its life.

Since fitness is a measure of the organism’s reproductive success, we know that natural selection will favour the life history strategy that results in the greatest number of offspring that survive to produce offspring of their own. This has important implications on both survivorship (mortality) and birthrate (fecundity) of an individual in a population, and these are related to the amount of energy that is used to reproduce over give time, known as reproductive effort.

As reproductive effort increases, we see parental survival decrease due to the amount of energy required to care for young either over longer periods of time or due to the sheer number of offspring. Organisms that produce offspring more than once over their lifetimes are known as iteroparous while organisms that use all their energy by sacrificing themselves for reproduction are known as semelparous.

Mating systems, or the pattern of mating between males and females in a population, are an area where the environment strongly influences an organism’s life history strategy. Examples of life history strategies include monogamy, where a lasting pair bond is formed, and promiscuity, where males and/or females mate with multiple partners. The choice of mating system is determined by the amount of dual parental investment needed for offspring to survive in a given environment.

Lastly, a number of models exist showing the interplay between life history traits and the environment. The fast-slow continuum hypothesis states that a species can be arranged along a continuum based on adult mortality levels, while r-K selection places organisms on a continuum of temporary to long-lasting competitive abilities in a given environment. 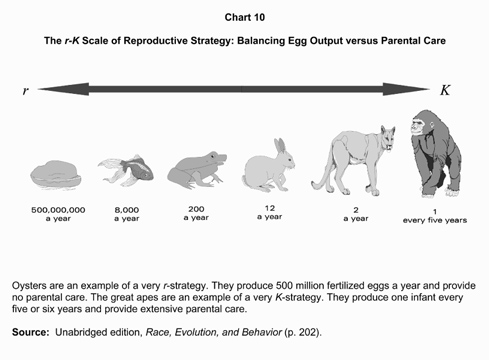