Starting from his humble beginnings in Kenya, Dr. Kingsford spoke of his fascination with wood ducks, often spending hours watching them in the field. This continued wonder of the natural world led him to complete his PhD on the “Reproductive biology and habitat use of the maned duck Chenonetta jubata (Latham)” in 1986, while simultaneously working on a farm. As both a young boy and a young scientist, Dr. Kingsford spoke of his strong desire to be continuously involved in conservation management, even during what others may describe as “personal time”. This included advising on the environmental impacts of mining while on a family vacation. His unrelenting defense of the natural world paid off as, a few short months after completing his PhD, he was offered a job at the New South Wales Parks and Wildlife Service. This allowed him to be increasingly involved in the formation of environmental policy by the New South Wales government. As the years wore on, and the grueling nature of the aerial surveys he conducted in 50oC weather began to show their weight, Dr. Kingsford longed to return to academia. Upon his return, he expanded his field of study to more than just the wood ducks that had originally inspired him, and began research toward the preservation of the habitat they occupied, including the Murray-Darling basin and the Macquarie marshes.

While working in the field, Dr. Kingsford interacted closely with individuals from communities in the area. This led to an inspired discourse on the importance of networking. The residents of these contested regions have vital information on the proper functioning of these systems that are inaccessible to researchers and politicians alike. He stressed that these citizens have many strong arguments vital to conservation management efforts, but often require the support of scientists to formulate their ideas in a concrete manner that politicians can incorporate into their strategies. This continued to a discussion on the various impediments that small groups and organizations face when advising on key environmental issues, such as the overly-cautious approach of scientists, the effect of green tape reduction policies on environmental groups, and the overabundance of opinions and facts of varying academic rigour which bombard politicians each day. In response to the confusion, Dr. Kingsford launched sustainability policy statements, available through the Society for Conservation Biology Oceania, aiming to provide scientifically backed objectives on a broad range of topics for use by policy makers. While still a young initiative, it has been met with optimism and positive reactions from the general public and the scientific community at large.

It was here that the discussion shifted gears, with Dr. Kingsford entertaining the various questions posed by the enthusiastic audience. One that stuck out was whether food such as rice should be sourced locally, at the expense of local waterways being drained for irrigation, or over-seas, where food miles come into play. Dr. Kingsford proposed the incorporation of urban agriculture as the way forward, going on to say that a shift toward a culture that takes a cradle to grave approach in the food industry is needed. This would begin through youth education programs, permitting for the increased awareness and understanding needed to allow for a large-scale cultural shift.

In regards to the education of younger generations, Dr. Kingsford had sound advice for those in their undergraduate years in the field of science: He emphasized that the focus should be on improving ones scientific background so that, in the face of opposition, the student’s credibility will carry their message across successfully. During much of his years in advisory roles, various individuals and organizations had vehemently opposed his views, some even calling for his immediate resignation. However, due to Kingsford’s strong academic background and the credibility awarded to him through years of hard work in the field, the views of the naysayers were quickly dismissed.

Another question posed by the audience was about the current state of conservation biology research, and whether enough was being done to make a reasonable impact. Dr. Kingsford suggested that conservation biology is moving toward an interdisciplinary field and, as such, it is crucial to incorporate a broader range of academics including those from environmental movements, economics, and the social sciences. The role of the latter has been historically understated, yet social scientists offer the best methods to study the impacts of, and the impacts to, humans caused by the current form of environmental policy.

According to Dr. Kingsford, bringing together the different scientific disciplines allows for a stronger discourse on a wider breadth of conservation issues. By mediating the dialogue between key players, policy makers are better able to take into account all factors when forming environmental management strategies. As an example, Dr. Kingsford often advises on a wide range of topics because, he mentions, “ideas tend to precede individuals.” By sticking to a message long enough through constant repetition, the general public begins to formulate their view on the importance of the topic at hand. Dr. Kingsford spoke of a lengthy discussion on the current state of environmental legislation and marine estuaries with someone whom he though he was familiar with, but later on learned that he had never actually met the person he was talking to, and that he had been recognized due to his high media presence.

In closing, Dr. Kingsford pointed out that, while conservation management can be mentally testing and occasionally feel like an uphill battle against forces that seek to satisfy vested interests over scientifically-backed facts, it is important to remain optimistic. The ability for positive change exists and, as conservation biologists – whether in the environmental movement, economics, or the social sciences – we have the ability to positively influence policy makers toward a better future.

Addendum: Since the writing of this article, Dr. Richard Kingsford, as part of the Lake Eyre Partnership, was awarded the prestigious International River Foundation prize for his work in preserving the Cooper Creek region of the Lake Eyre basin. This award marks a first, as the prize has never before been awarded to the conservation of an entire river system. 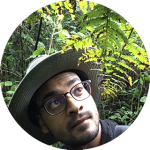